” ye have become intolerably odious to the whole nation … ye have sat too long here for any good ye are doing … in the name of God, go! ” (Oliver Cromwell, April 1653)

Members of the Westminster bubble (and the EU supporting establishment) have completely disconnected with the electorate. Here’s the reality:

A Member of Parliament is a person who has been elected by the people in a particular area to represent them in a country’s parliament. (Collins Dictionary)

A once in a generation decision. The referendum on Thursday, 23rd June [2016] is your chance to decide if we should remain in or leave the European Union. This is your decision. The Government will implement what you decide. ( Statement in the leaflet issued by the Conservative government in advance of the EU referendum )

“The country voted to Leave the EU with the largest democratic mandate in the history of our great nation. MPs must answer that call, trust in the people as they were trusted and reject the Chequers proposal. I urge MPs of all parties to accept that Britain will leave the EU on 29th March 2019, without a new deal with the EU, and start trading globally on WTO terms. Leaving on those terms means we have a new deal for the people of Britain; we will have control of our laws, our borders, our fishing waters, our taxes and our regulations. The sooner Britain truly leaves the EU, the sooner Parliament can devote its efforts and attention to the challenges our country faces at home, challenges which we can solve together when Parliament is once again sovereign, when we are outside of EU control and free to prosper.” (Simon Elliott, Investment Professional)

A line in the film Peterloo, about people protesting for democratic reform two centuries ago, “What is the use of a Parliament if it does not listen to the people?”

Unless MPs urgently start listening to and respecting the views of the people, extremism will become the vote winner.

“We are with Europe but not of it; we are linked but not compromised. We are associated but not absorbed. If Britain must choose between Europe and the open sea, she must always choose the open sea” Winston Churchill

“We decide on something, leave it lying around and wait to see what happens. If no one kicks up a fuss, because most people don’t know what has been decided, we continue step by step until there is no turning back” Jean-Claude Junker

It is clear that a large number of politicians are unaware how angry the electorate has become regarding the Brexit negotiations. It is not just the growing loss of patience driven by the anti-democratic activities of many MPs and establishment figures; the flames are also being fanned by continual anti-British government propaganda in the mainstream media and this only adds to the intransigence of the EU negotiating team. And the ongoing threats from the EU that the electorate should be punished for deigning to leave only add to the British peoples’ resolve – “the sooner we are out the better”.

The United Kingdom has been repeatedly told that unless it pays an unspecified huge sum of taxpayers’ money to the EU, there can be no free trade agreement post March 2019. If this is the bottom line, then so be it – there will be no free trade deal and both sides will lose out. It is infuriating and embarassing for the citizens of this great country to see this total disrespect for the UK and its importance as a trading partner go unchallenged. The two major UK political parties promised Brexit in their manifestos and that is what the electorate voted for. In order to regain the initiative, this is what the government must do:

Many in the EU and vested interests here believe that by repeatedly running down the strengths of the UK, the British will cave in and hand the keys to Westminster over to Brussels. Neither group understands the British people. We are staunch believers in democracy and we demand strong leadership and fairness.

“If, however, we leave the European Union without an agreement the default position is that we would have to trade on World Trade Organisation terms…” The Prime Minister’s letter to Donald Tusk giving notice of the UK’s withdrawal from the EU

They can’t say they weren’t warned – time to plan for a bright future for the people of the UK, and that time is now. The government and the United Kingdom can only gain from seizing the initiative and moving forward – a vote winner for sanity.

“The will of the people shall be the authority of government” Article 21, The United Nations Universal Declaration of Human Rights 1948

One year on, during which various vested interests attempted to derail the will of the people, we have triggered article 50 of the Lisbon Treaty and the exit negotiations have commenced. At every turn, the Remain supporting media, especially the TV tax financed BBC (in direct breach of its charter),  has aggressively pursued a negative agenda using every available opportunity to decry the elected government’s Brexit policy and team.

In the midst of all this negativity, we are at risk of losing focus on the plain facts and it’s worth reminding ourselves on a regular basis of the reality of the situation:

The current blitz of anti-patriotic sniping by the “liberal elite” should be overridden by the loud message that leaving the EU represents a once-in-a-lifetime opportunity to put the UK back where it should be; a leading nation in a fast developing world. A definite vote winner for an exciting future.

Government of the British people, by the unelected Brussels people, for the Washington people – Barack Hussein Obama, President of the USA

“We will create more wealth and more jobs by being outside the EU. We will be in control of our destiny. And control, I think is the most important thing in life and business” James Dyson, entrepreneur and inventor (Dyson is the No 1 brand leader in the German vacuum cleaner market)

As EU referendum day approaches, many voters are still undecided and feel there is little impartial information available to help them decide whether to vote Leave or Remain. With less than one week to go, the debate has come down to a few key issues and the Remain campaign sees our future as either keeping the status quo or “a leap in the dark”. The overview below provides an at-a-glance summary of the issues and factual commentary on them.

IMMIGRATION – The Remain camp is silent on immigration although 250,000 EU immigrants arrive here every year. David Cameron cannot explain how he reconciles his promise to cut immigration with his support of the EU’s freedom of movement zone. Mr.Cameron has committed himself to the acceleration of Turkey’s membership of the EU as well as visa-free access to the EU for all Turkish nationals from the end of June. Based on previous experience following the accession of new EU members, Britain can expect an influx of millions arriving in this country, the impact of which seems unimportant to Remain supporters

DEMOCRACY – Again, the Remain camp is silent on this fundamental issue. The stated objective of the EU (as per the Five Presidents Report) is ever closer union. The Universal Declaration of Human Rights states “The will of the people shall be the basis of the authority of government” but the government of the EU as a whole has never been submitted to the will of the people. For the euro to survive, its users must become one country with a single economic, fiscal and legal framework determined by its government in Brussels. The minority non-euro countries such as Britain will either have to abandon their currencies or be completely sidelined. “There can be no democratic choice against the European treaties” Jean-Claude Junker, EU Commission President.

TRADE & JOBS – Remain states that EU membership means a stronger economy with 3 million jobs linked to our trade with the EU and this would be put at risk if we vote Leave. But why should it? The free market, cosmopolitan, pro-globalisation economic case for leaving is stronger than ever. Research shows that nearly 70% of small and medium sized businesses feel that the EU is a hindrance rather than a help. The Adam Smith institute says “leaving would be a journey, not a big bang. In the short term a Brexit would almost certainly mean the UK remaining in the European Economic Area (EEA), like Norway.”  Over a subsequent period, the UK would negotiate a more appropriate British free trade agreement. Britain imports nearly £300 billion of goods and services from Europe each year therefore it is imperative for Europe to reach a satisfactory trade deal with the UK to safeguard millions of mainland Europe jobs. It can be argued that in fact, the EU as a free trade entity is passed its sell-by date as global traders can operate under the auspices of the World Trade Organisation, the ILO (labour regs),the UN (standards) and the WHO (health).

SAFER – Remain claims that the UK is safer by being a member of the EU, essentially because of the existence of the European Arrest Warrant (which can be used to deport people) and because there’s strength in numbers. The evidence on the ground confirms the opposite is the case. “The greatest threat to our social stability at the moment is the fact that we have weakened our border controls at a time when they should have been strengthened. As a result, much more serious organised crime, controlled from abroad, is operating in the UK. And as the EU increases its membership, the situation can only worsen.” Anthony Stansfield, Thames Valley Police and Crime Commissioner. The EU is also intent on forming its own army and foreign policy (as declared in Article 42 of the Lisbon Treaty). Nato is the most successful military alliance in history because of the deterrent effect of US membership but the EU is planning to revert to the uncertainties of the pre-Nato era; look no further than the Ukraine situation. “If the Euro-oligarchs get their way, sooner or later we shall find we no longer have the freedom to deploy our Armed Forces as we choose” Major General Julian Thompson, Royal Marines.

As 23rd June Referendum Day approaches, it becomes increasingly clear that the status quo is not an option. The EU is facing an ongoing economic and social crisis and is desperate to accelerate it total political integration agenda. The disastrous misgovernment of the eurozone has resulted in a huge economic downturn which shows no signs of ending. Southern Europe and Italy in particular are on the verge of social and financial meltdown which will necessitate further gigantic bailout contributions from all the northern EU membership. No-one can predict the future, so how best to deal with the inevitable uncertainties of our ongoing relationship with the EU and protect the interests of the British people? Is it to remain in the EU and let Brussels carry on with its United States of Europe mission, its political experiment aimed at creating an empire whilst ignoring the destructive consequences of its actions? Or is it to vote Leave and return self government to Britain thereby saving the British people billions of pounds which can be used to to focus on what’s best for the future of Britain? Brexit is not a leap in the dark, it’s a logical and necessary step for Britain to realise its full potential in the global economy – VOTE LEAVE for a bright future. 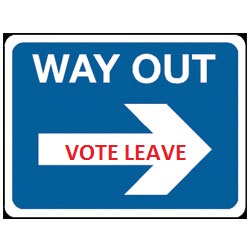